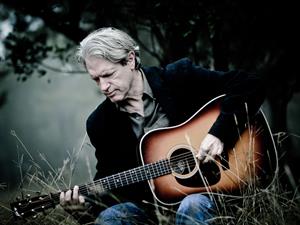 Sam Baker’s music has been compared to that of John Prine. Baker’s 2013 album, Say Grace, was listed by Rolling Stone as one of the top 10 country music albums of 2013. In his review of Say Grace, Jim Fusilli wrote: “In Mr. Baker’s tales, the personal becomes universal through his keen-eyed writing, supported by well-chosen instrumentation and what might be called spoken-word melodies.”

In 1986, Baker was traveling by train to Machu Picchu in Peru when a bomb placed on a luggage rack above his head by the Shining Path guerrilla group exploded, killing seven other passengers including the three people who had been sitting with him. Baker was left with numerous injuries, including brain damage, a cut artery, and blown-in eardrums. His injuries required 17 reconstructive surgeries. He has a constant case of tinnitus and the fingers of his left hand were left gnarled. He did retain enough dexterity to grasp a guitar pick and over time, re-taught himself to play his guitar left-handed.

Learn more about Sam Baker, his music, and his art at https://www.sambakermusic.com/

Google Yahoo iCal (Outlook, Apple, or other)
Scroll To Top